Are you suffering from entrepreneurial envy? 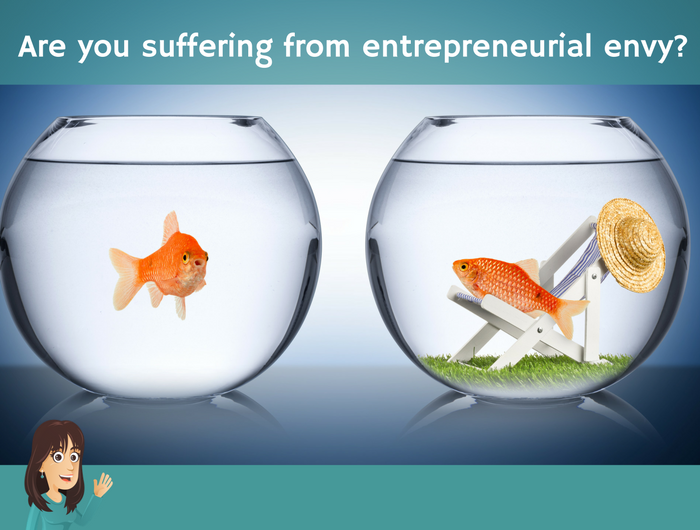 Or the year I went full circle with my business

I don’t know if my yin was squabbling with my yang, my cosmic planetary alignment was skewed, or I simply wasn’t eating enough bananas. But I was up and down like badger on a pogo stick.

At first I put it down to being a bit tired. It’s been a huge year at Toon HQ, and right now I’m running on fumes.

But then I realised I was suffering from something serious.

I had a bad case of entrepreneurial envy.

And perhaps you do too.

So in this post I’m going to take you through a clinical diagnosis of entrepreneurial envy—the tell-tale signs, the potential treatments, and the long-term side effects.

This year my business and I turned a corner.

After years of happily cruising down the road towards small business success, I inadvertently hit an on-ramp and found myself on the entrepreneur highway.

And let me tell you, it’s been a bumpy ride full of potholes and with loo spots few and far between.

Now this wasn’t a deliberate pivot. As I did more, and became slightly more well known, I was asked to do more.

My ecourse led to me being invited on more podcasts.

One speaking gig led to another. And word of mouth went from a mumble to a slightly irritating noisy hum.

My marketing was working – it was terrifying.

And as I attended more events, I found myself rubbing shoulders (and only shoulders) with horribly successful people.

I went from following these people from afar on social media to mingling, having dinner and suffering late night karaoke sessions with them.

And it messed with my tiny fishy mind.

At first I coped just fine with these situations.

I focused on spooning soup noiselessly into my mouth while those around me talked about their eight trillion Facebook followers.

I nodded politely when they regaled me with tales of making $68,000 dollars in membership revenue in the time it took me to butter my bread roll.

I smiled. I made appreciative noises.

But inside I was nonplussed.

They were them. I was me. Yes I was smaller, but business isn’t a competition, right?
Right?

Unfortunately, it wasn’t long before I started to think, “Wrong”.

After prolonged exposure to excessive entrepreneurial talk, it begins to seep into your inner being through the cracks in your confidence.

I wanted what they had.

I wanted to be a jet-setting entrepreneur with a membership program, a masterclass, and a warehouse full of millennials squatting on bean bags in the up-and-coming part of town.

I wanted to be a real entrepreneur.

They say that when people are far enough away from you, you admire them. But the closer they get, the more you envy them.

Well I can envy Beyonce’s talent because I have no desire to be a singer. But when I see someone a few rungs up the marketing-type-person ladder, it feels doable.

I could be one of them, couldn’t I, and bask in the glow of my ‘golden octagon’ of entrepreneurial success?

The Golden Octagon of Entrepreneurial Success 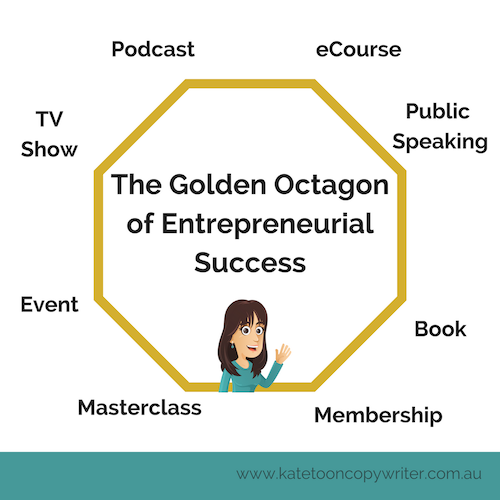 Psst: I should have added digital magazine to the list but I forgot.

I needed to do all the things, and I needed to be the next big thing—now.

(Well, maybe after I’d given the dog a bath and popped into Coles to buy fish fingers .)

The symptoms of my entrepreneurial ailment began to present pretty quickly.

A quick search of the interwebs provided many possible treatments for the entrepreneur envy condition. Unfortunately, they all promised that if I followed their recommendations I too could join their hallowed clan and be cured.

I’m sure some of these may have worked. But I’ll never know because they all involved giving big chunks of cash to other people—something I don’t particularly like doing.

I decided to create my own home-made remedy for my entrepreneurial illness, which involved three core elements:

Unwilling to pay for someone else’s expensive mastermind, I created my own with five other clever people. Of all my DIY treatments, this has been the most successful.

After deciding at the start of the year to go completely solo, I realised I was never going to be a mega success without a team of minions.

I already knew there would be a pain barrier to go through before things were running smoothly. But I’ve also learned that if the person seems shit at first, they probably are.

I decided to upgrade my much-neglected software and buy all the things, the main three being:

I also took a step away from day-to-day copywriting to work on my business. Sayonara, clients.

My business has never been in better shape. I, on the other hand, am shattered.

But through this relentlessly tedious, stressful and exhausting process, I realised something important.

I’m not cut out to be an entrepreneur.

I don’t have the energy, the drive or the singlemindedness.

I like the idea of the money, and even the fame. But when I do get a blob of money I realise there’s nothing I need, and people recognising me makes me feel a bit itchy.

Whenever I see someone boasting about how they’ve done 24 speaking events I feel a momentary pang of envy before thinking, “Poor you. All that travel. All those shitty plane trips”.

I lust after someone else’s membership program with automated upsells, downsells and sideways sells, and then think, “What a faff”.

I mentally build my awesome team, and then remember I don’t like working with others, which is why I went solo in the first place.
In short, I really can’t be arsed.

So I kind of want what I don’t want. Go figure.

One of the main results of my love/hate relationship with entrepreneurism has been my anti-entrepreneurial rants.

Whenever I feel the boil of confusion and angst growing, the only way to lance it is to blurt out my feelings in a Facebook post. (You can read one here)

But rather than just becoming another internet shouty man (See video below), I’ve started funnelling my energies into an event. (Which ironically pretty much ticks off that Octagon.)

Oh and a book about being a misfit entrepreneur, which you can read more about here.

After taking advice from several wise beasts, I’ve decided to be more comfortable with my own version of entrepreneurism.

And to kill the comparison monster once and for all.

To be more awesome. To just be yourself.

And to also celebrate other people’s success. A lot of these crazy awesome entrepreneurs are now my mates, and people I genuinely like. I’m learning to be happy for them, rather than gnashing my teeth with envy.

I’m learning to admire, not envy, no matter how close the person is to me.

I started this year as a successful solo business person, and I’ve gone full circle.

Yes I have the course, the podcast (two, actually), the event, the membership program, the TV show, the speaking gigs, and the book is on its way. But it’s all small scale. It’s all on the low-down.

I don’t have the bean bags, or the team.

I don’t have the aggressively white teeth, or enough air miles to buy a small African nation.
But I’m okay with that, for now.

If you’d like updates on how I’m progressing with the book, and would like to help me make decisions about the cover and other fun things, feel free to follow me on Facebook or join my I LOVE SEO group.

Want to read the book intro?

Do you suffer from entrepreneurial envy? Share your feelings of angst and worthlessness below. At the very least you’ll make me feel better, and it’s all about me.

Are you suffering from entrepreneurial envy? was last modified: August 15th, 2019 by katetoon