How Donald Trump helped me write my book in 7 days 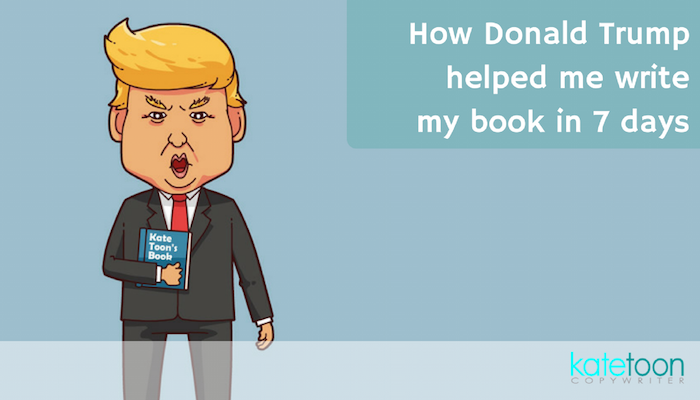 Or, how threats can help you get started

I’ll be honest: I feel a bit dirty having the words ‘Donald Trump’ in my headline. And yes, I’ll admit it has a little bit of a click bait style to it. But I’m doing it for a reason, which will become clear (for those of you brave enough to read to the end).

I’m writing a book. Not a glorified two-blogs-posts-glued-together-into-an-ebook book. It’s booky book, with a story and an arc and a stunning and seductive heroine.

The heroine is me. And the book tells the story of how I built three successful businesses and a lovely lifestyle without following the traditional entrepreneurial rules.

It’s not a get-rich-quick book either, or one about how-to-work-one-hour-a-week-from-a-hammock.

And if you see any mention of earning a seven-figure income you’re welcome to punch me in the boob.

You may not know this, but I’ve already written a few books. There’s my poetry book called Gone Dotty, which is packed with witty heartfelt poems and dog poo haikus. I also wrote an equally awesome illustrated kids book called Wobbly Jim and a Parrot called Sue about a lonely pirate and a kick-arse female parrot.

I even have an agent. The kind folk at Curtis Brown felt I had enough promise to make me biro my name on a contract, which was crazy exciting at the time.

But was three years ago, and since then I’ve done diddlysquat.

My third book, a young adult novel, sits in a neglected folder in the far corner of my second screen. (It’s where all my ‘important, but won’t even happen’ projects go to die.)

And I’m sure Curtis Brown have completely forgotten who I am by now.

Why such a long break? Because about three years ago I decided to put my creative writing on the backburner and started building the Toon cul-de-sac. (I’d say empire, but cul-de-sac seems more fitting).
But I digress.

This isn’t a novel, or a kids’ book. It’s a business book.

Because when you’ve got a website, a community, an ecourse, a team and two podcasts, the next logical step is to write a book, right?

And of course, I’ve chugged on the entrepreneurial Kool-Aid and now believe that writing a business book will put me on the fast track to:

* Ironic seeing as while I love speaking, the preparation still brings me out in a sticky rash.

You’re probably after some tips on how to write your own book, yes? Well, here are mine.

I’ve written a lot of posts for my own site, as well as a heap of guest posts.
All that writing has helped me find my ‘voice’, and given me a good idea about which topics will resonate with people and which ones will fall flat on their bored little faces.

And that’s good to know, because although my book won’t just be a cobbled together collection of posts, it will draw on some of the content I’ve already written.

You could view the two years I’ve put off writing this book as procrastination.
But I like to think I’ve been letting my idea marinate. I’ve thought about the book while taking my dog for walks, waiting in line at Coles, swimming, dozing, and doing a million other things. And I think that’s why when I finally did start writing it all came out super easily.

I found an amazing book guru in Kelly Exeter. She’s written a few books herself, edits content for Flying Solo, and is an all-round good human.

She has a quiet calm and sweetness about her, like a meditating rabbit.
And that makes her the perfect foil to my slightly hysterical, sketchy self. I can honestly say my Flying Solo posts rarely come back with any edits.
But one of the reasons is Kelly lays down such good guidelines in the first place.

When my book is finished I’ll be passing it on to Bill Harper from Sharper Copy, who has been my editor for several years.

I can’t praise him enough. This will make him cringe, but knowing he’s there makes everything easier to write.
I don’t need to be a perfectionist because Bill is. He always brings out the best in my writing, and pushes me to try harder.

I didn’t feel I could start until I had a working title. Kelly and I brainstormed the title and came up with a few ideas, which I shared with the brains trust in my Clever Copywriting Community. Having 60 or so excellent writers chew over your idea is a great way to polish something that’s rubbish into a shiny gem.

The title for my book will be

We spent a lot of time agonising over the adjective (‘accidental’, ‘messy’, ‘unplanned’), but then the clever Rose Spagnolio came up with ‘misfit’ and it fits perfectly.

We also played around with the subtitle. It was originally ‘How I succeeded in business despite myself’, but it felt all a bit “Me! Me! Me!”. And while I do use my story for the arc and examples in the book, it isn’t really about me. It’s about how my failings and successes can help the reader.

So what actually got me to start writing? I’d love to say I found some space in my life, and casually wrote the book from a comfy arm chair with a cat on my lap.
But I have zero space in my life. And I don’t have a cat.

It actually took a threat from Kelly Exeter to get me started. She told me that if I didn’t send her a fairly finished first draft by the end of the week, she’d donate $100 of her own money to Donald Trump.

I don’t like to get political, but I’ll say without reservation that Donald Trump is the biggest arsehat I’ve seen in a long time. I find even the thought of him being president quite terrifying. And to think I could be contributing to that was too much to bear.

So I started writing. I also announced my intention on Facebook, deleted my phone apps, ignored my email, and focused my busy brain on the task in hand.

This next part is a bit of a diary of the week, and shows how I struggled through writing the first draft.
Oh, and a quick caveat: I already had a rough chapter outline before the week began.

Husband doing school run, so I biked to pool, did some laps, came back and walked the dog before I got stuck in. This makes me sound like a super healthy person. I am not.

It’s now 4.40pm, and every single muscle and tendon in my body HURTS.

The day was lost to real work. I had a coaching call with my SEO students, an SEO podcast to record, two VAs to interview, and a pile of admin. No work done on book.

A much better day. I still got waylaid by admin first up, when I knew I should have just ignored social media and email and focused on writing.
Also had a Hot Copy Podcast to record, which ate into the day. But managed a three-hour writing stint and powered through around 6,000 words.
Also dropped some chapters and added new ones. The structure is coming together.

DAY 4: Thursday — Pumping it out 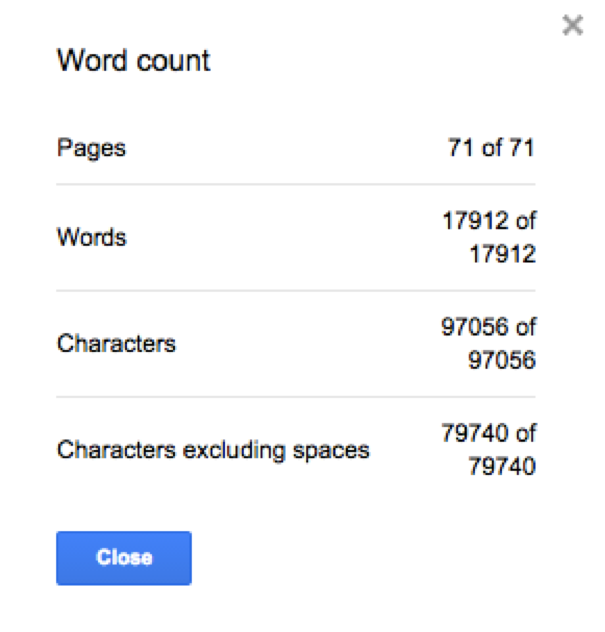 A solid four hours of writing, and another 7,000 words completed. Six chapters pretty much there and polished. Ten more other chapters still in bullet points, notes and half-written paragraphs.
A lot of moving things around to tell the story in an order that makes sense, and trying to draw out the learnings into actionable action thingies.
I head to Facebook to announce my word count.
Everyone seems amazed. Yes, 17,000ish words is great. But I’m not sure if they’re in the right order.

Mini Toon is ill, and has to stay home from school. I could put him in front of the telly and keep on writing, but to be honest I’m grateful for the excuse to stop and take a break.

I send the first draft as it is to Kelly. (I reckon I need another 8,000 or so words to have a fairly finished first draft.) It’s not perfect, but it’s a big, fat, furry start.

And I hold my breath.

After a few minutes I got this message back from Kelly:

Kate – this is an amazing effort for a week. Actually 4 days. Trump ain’t getting a dime!

I’d done it. It’s not perfect, and it needs a lot of work. But the blank page was gone.

As Kelly said, “We’ve broken through the initial block around writing this book. Getting it finished will be easy”.

I’m taking a week off writing to focus on running my business(es). But I’ll have another enforced writing week after that.

Kelly plans to read through the chapters and make some general notes and observations (“love this”, “expand this”, “this sucks”, etc.)

She won’t make any major structural comments until the first draft is finished and I feel like I’m pretty much there with it.

Then it will be structural edits, after which I’ll pass it over to Bill for editing, and possible a third person for proofreading.

After that I’ll move into the production phase of the book—typesetting it into an ebook and printable version, getting the cover photo taken, and having the cover designed.

And once that’s all done I’ll need to navigate the confusing waters of getting it up on Amazon, promote it, and hopefully get you to read it.

I could have written a fairly passable 20-page ebook on SEO or copywriting in a few days, whacked it up on Amazon for free, and tried to get a best-seller position I could add to my job title.
But I really want this book to stand the test of time. I want it to live on someone’s office bookshelf. I want it to be highlighted, have Post-It Notes stuck to it, and for pages to fall out from being read so many times.

It’s a big ask, and makes it even more of a challenge.

And only time will tell if I manage to do it.

If you’d like updates on how I’m progressing with the book, and would like to help me make decisions about the cover and other fun things, feel free to follow me on Facebook or join my I LOVE SEO group.

Want to read the book intro?

Once you’ve read it, I’d love you to share your thoughts — good and bad — in the comments section below:

Have you ever written a book? What was your process? And which bits did you find the most challenging?

How Donald Trump helped me write my book in 7 days was last modified: August 15th, 2019 by katetoon