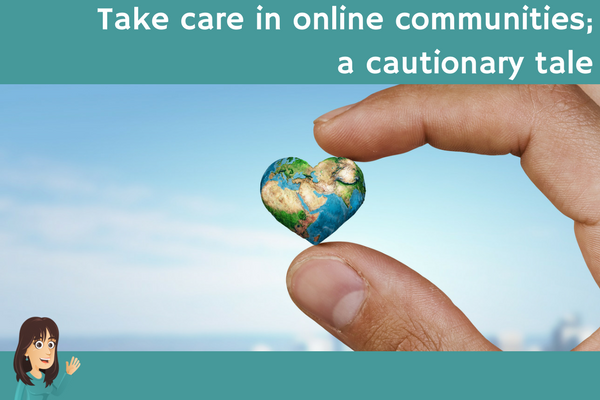 I’ll be honest, I don’t play well with others.

I’m always the first to leave the BBQ.

The thought of breakfast networking makes me gag on my croissant.

And my all-time favourite quote? It’s “Hell is other people.”

That’s part of the reason I’m a soloist.

But as we all know, solo working can be a lonely old game, so occasionally I venture out from home office hermitage and try to connect with other humans.

Social media seems an obvious place to start, but it can feel like you’re posting into the void.

No engagement, no likes, no shares, no nuffink.

It’s a one-way street. Or it was, until I discovered online communities.

“BE WARNED: The truth is there’s no such thing as a private community.”

Google+ has its communities.

These groups and online communities are smaller, friendlier ways to attack the interwebs.

They connect like-minded individuals who get to share thoughts, issues, worries and triumphs in a caring, open, cuddly environment.

I joined several and set up a few myself.

I shared my highs, my lows, my ins and outs, my ups and downs.

Whatever direction I was heading in, my community buddies were the first to know.

At first it was great.

The love and encouragement wrapped out around me like a freshly washed doona.

They cared, they listened, they shared and some even became clients.

But then I screwed up.

I found out a competitor had possibly copied some of my content and I complained about it in a group.

I was stressed. I needed advice. I reached out to my community.

I didn’t mention names, but I see now it was an easy guess.

The tsunami of backlash was … damp, to say the least.

You see, the interwebs is smaller than you think.

Australia is smaller than you think.

And of course someone in that group was best buddies with my potential copycat and horribly offended I would even infer the possibility of some crafty ‘cut and pasting’.

They told said person, they complained to the admins and ultimately, made me feel as uncomfortable as a possum in hot pants.

No matter that my competitor and I had begun to sort things out. 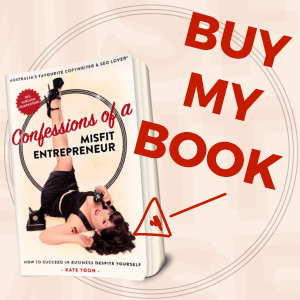 No matter that my emotional kettle was no longer boiling.

No matter that I apologised.

My community reputation was blown.

Suddenly I was the bad guy and the private fluffy cocoon I’d been nestling in became a spiky, salty, red room of pain.

Everyone’s knives were out for me (they were pointy as all hell) and I also got a warning from the group’s administrators.

So I did what I felt was the best thing to do: left quietly via the back door.

I miss that group. I miss the banter.

I miss the random inane posts about our days.

I miss the advice and most of all I miss the camaraderie.

But it taught me a valuable, if harsh, lesson.

Online communities are NOT a safe place.

No matter how small the group, unless you’re related to them – or have some awesome stuff to use as blackmail – you’re always at risk that what you say can be shared (and shared and shared).

Nowadays, when I see people ranting and raving in communities (or forums, or the comments of blog posts), I shake my head with equal parts pity and sympathy.

They’ve clearly not yet learned (or don’t care) that:

They’ve not yet learned it’s important to be careful what you say because someone, somewhere could be taking it the wrong way, or telling someone else about it.

Don’t get me wrong.

I’m not about to start hiding behind my fluttering fan and simpering niceties just to keep the masses happy.

If I have stuff to say I’ll say it. I’ll just think a bit harder before I do.

And the next time I have a bad day? I think I’ll be talking it out with my dog, the pot plant (or even, as a last resort, my husband. Ha!).

Online communities are not a safe place #business

Have you ever run afoul of your favourite online communities?