Should you change your name when you get married? 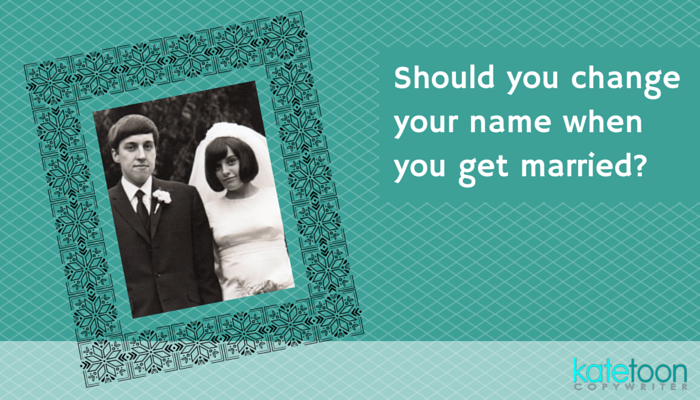 These days taking your husband’s name after marriage seems to be back ‘in vogue’. What are the pros and cons of name change and is it the feminist thing to do?

To me, changing your name feels old school. It takes me back to the days when women were owned by their husbands, and a woman had as much value as a prize cow. But as I see several of my most intelligent and liberated female friends dropping their birth* names in favour of their husbands, I’m led to ponder the reasons why.

I can think of several damn fine reasons not to change your name including:

1)    Reputation: If, like me, you’ve built a network and reputation, by the time you get married it seems foolish to drop your name. People are easily confused and you’re sure to lose some connections. Also anyprofessional achievements, awards, accreditations, etc. listed under your birth name might be lost in the transition.

2) Career: A study in the Netherlands found that you might be penalised in the job market if you adopt your husband’s name.

“Participants thought that a hypothetical woman who took her husband’s surname was “more caring, more dependent, less intelligent, more emotional, less competent, and less ambitious in comparison with a woman who kept her own name.”

The report found that employers might think a woman who changed her name is more likely to become a homemaker and would therefore not be as dedicated to her job. A touch harsh, no?

2) It’s a huge faff: Changing your name is a giant pain in the buttock. Bank accounts need to be switched, passports revised, bills updated, mortgage papers changed and Medicare cards replaced, not to mention all those social media profiles that will require updating. And I’m sure you’ve got better things you could be doing with your time, right?

3) Credit rating: Yeah, you trust your husband now (hopefully) but who knows what financial strife he might get into. It might be a good idea to keep your credit rating separate.

4) Divorce: Okay, so perhaps this is not something you want to think about while you’re slicing the wedding cake, but what if your marriage goes down the pan? Do you really want to have the name of someone you loathe?

5) It’s sexist: If the definition of sexism is ‘discrimination on the basis of sex’, then a women changing her name to a man’s could perhaps qualify. If men were equally as willing to change their names to that of the women then fine, but they don’t. So… sexist or not?

The ‘do change’ argument

There are also some real advantages and reasons to change your name, such as:

1)    Embarrassing surnames: Now admittedly when you have a second name as cool as ‘Toon’ you’d be a fool to change it, but if your birth name is ‘Buttock’ or ‘Flange’, then I can see the argument for changing it to something less crappy.

2)    Hard to spell/pronounce surnames: Tired of spending 30 minutes on the phone every time you want to book a restaurant, a flight, or taxi? Sick of spelling out every vowel and consonant to some cretinous customer service person? Well fair enough – change your name to his (or something else) immediately.

3)    It’s tradition: This one doesn’t wash with me. It used to be tradition to include ‘obey’ in the vows, put a sixpence in your shoe and break the wedding cake over the brides head to bestow fertility. Traditions die and we make new ones, but that said, I guess we shouldn’t be afraid of embracing feminists who also believe in traditional values.

4)    Your kids: Some argue that if a kid’s parents have two different surnames then others will assume they’re divorced. Perhaps that washed in 1932, but these days? Really? Divorce has zero stigma, especially when heaps of couples with kids aren’t even married.  But I guess if you want to get your kid into a Catholic school or something, this is a good reason.

5)    You can pick stuff up: It shits me that I can’t pick up parcels or dry cleaning or tickets for my husband because he has a different surname.

6)    Your husband wants you to: My husband wants me to do lots of things. I pick and choose which things I do based on how important it is to him, my own needs and whether I can be bothered. I’m tempted to question a husband who insists on a name change, as really, why should he care? But perhaps he’s the only boy in a family of 16 sisters who have all gotten married and changed their names and wants the family name to continue. Your call.

7)    You want to feel more like a family: I get this. All one name is nice. You become a little cohesive unit, like a band or a football team. There’s something really lovely about being a clan, but then there’s always the hyphenated option.

8)    Hyphens suck: Our son has been burdened with ‘Moussa-Toon’ as his surname. Enough said. Also, what happens if he marries someone with a double-barreled name? Like Carstairs-Jones. Will they be the Moussa-Toon-Carstairs-Jones? Generational hyphenation could be the new scourge of our society. We’ll need bigger bankcards just to fit our names on them.

I’ll always be a Toon. I have lived with this name my whole life; it’s part of who I am. Personally I’d never want to change it and thankfully my husband never cared one jot about the name game. For me, no matter how you try to justify it in a modern context, the practice of changing surnames still feels a bit like it’s about identifying property.

However, It’s all about personal choice, about a woman’s choice. If you genuinely want to change your name (for whatever reasons) and are not being forced into it by either social pressure or your husband, then all power to you.

I’m just pleased that I managed to write this entire post about names with out once using the classic Shakespeare quote.**

*I refuse to use maiden name. I’m not and have never been a fecking maiden.

**’A rose by any other name would smell as sweet’.

Did you take your husband’s name? Or keep the name given to you at birth?

This article first appeared in Discordia. Image courtesy of my parents, Mr and Mrs Toon.

Should you change your name when you get married? was last modified: May 17th, 2016 by katetoon