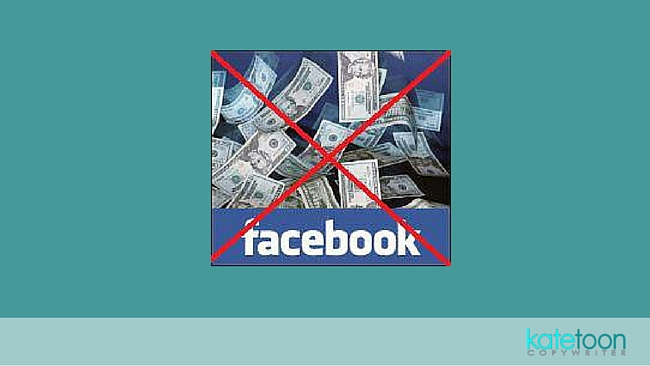 Every time I log into Facebook, I notice that more and more people have joined a rather verbosely titled group called “NO, I WILL NOT PAY $3.99 A MONTH TO USE FACEBOOK FROM JULY 9TH 2010!”

I joined the group today, for research purposes only, and discovered a can of very angry worms, venting their spleen about the “outrage’ of a possible, impending charge.

“Facebook may as well jerk off..I enjoy facebook alot and it is a pretty big part of my life. I refuse to pay. Why does everything have to come down to money with these people.”

Erm, could it perhaps be because they’re a business? Do people really believe there is some magnanimous

Facebook Gandhi out there dedicated to fixing bugs, adding new applications and ensuring server up-time – all out of the goodness of his heart?  Don’t be daft. Facebook might have started as cute little website for college students but now it’s a huge, web-dominating beast. With a zillion or so users* all panting for more – surely the folk at Facebook have a right to charge?

“No way!” shout the angry worms. “What about the advertising? Don’t you think they (stet) make enough money from advertising?.”

Well, apparently not. According to this article, Facebook is “burning through millions of dollars a month with no magic levers to reverse the trend in the short term”.

Many of the anti-fee camp say that if a fee were to be charged, Facebook would have to be ‘ad-free’. Why so? We’re happy to watch ads at the cinema even though we’ve paid for a ticket, we buy magazines full of ads and pay to rent DVDS with ads at the start. Just because a form of media has ads doesn’t mean we don’t have to pay.

Others quite sensibly recommend that Facebook could offer a ‘basic version’ with a simple Wall, inbox, limited friends and no applications. Users could then upgrade (and pay) for more enhanced versions with all the bells and whistles. But still the worms cry, ‘No! Facebook has been free from the start; it’s not fair if they start charging now.” Oh, my naive FB fans – wake up and smell the evil stench of capitalism.

It is the oldest sales tactic in the book: give something away for nothing and then, when customers are addicted, start charging. Just think of all those lovely crack dealers out there, and Nestlé flogging all that fabulous baby formula to penniless African mothers. The world isn’t fair.

In the words of one angry member: ‘We should all just stop using Facebook until they agree not to charge us.’ Yeah, like that will work. Just think of all those groups started to protest Facebook interface changes, angry that the site should dare change anything without consultation with its users. Effect = bugger all. Others ask: ‘Why would I pay for Facebook when I can use Bebo?’ Quick answer – Bebo sucks.

Of course, Facebook denies it. A spokesman for the company said: “We have no plans to charge users for Facebook’s basic services. Facebook is a free service for its 350 million users.”  Take note of the words “basic services” and perhaps put a nice fat ‘yet’ after the word ‘plans’ and I think it’s probably true. Come on – they’d be fools not to.

We’ve just been lucky so far. Free news, free search, free Facebook. I’m frankly amazed that it’s lasted this long. Many newspapers have announced they’ll soon charge for access to their info; I think Google will be next. A monthly fee of $5.99 for 100 searches, more if you want to go advanced, perhaps a lower charge if you’re ‘feeling lucky’. Hmm…. maybe I’ll start a Facebook group protesting that.

Personally, I’d be happy to pay a few dollars a month to access Facebook. I like the site, enjoy keeping in touch with my mates overseas, boring people into a stupor with my inane status updates, and am delighted that Farmville was briefly able to bring some meaning to my post-baby life.

Whatever they charge, per day it’s likely to be cheaper than a telephone call, text message or the price of a stamp and a damned sight easier than actually having to meet people and talk face to face. The sociopath in me knows I’d pay ANYTHING not have to do that.

A few other ‘I won’t pay’ user comments to finish off, not because they add anything to the argument, but because I never cease to be amazed by the poor grammar of Facebook users: