Is swearing good for you? 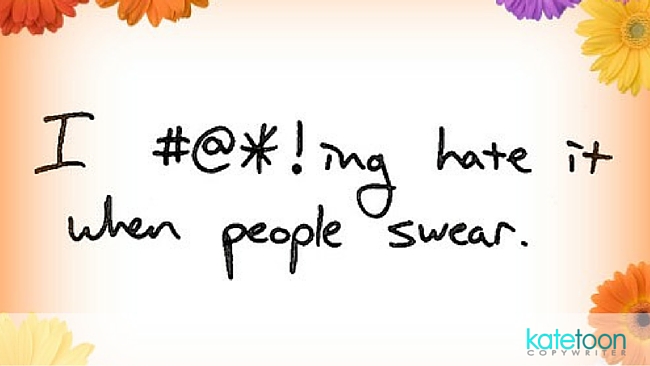 Have you ever noticed how much the people around you swear? Wherever I go I hear people joyously communicating through a storm of colourful language. As a non-swearer myself (most of the time), I find it somewhat unnerving, but after a little bit of reading I’ve found that saying ‘bad’ words might be good for you.

The fact is that people love to swear, and for most it’s part of every day life and for many an essential part of communication.

But did you know, there are actually five types of swearing?

Is swearing good for you? #swearing

The glorious Fword can be used as an adjective, adverb and noun. Are many other words that versatile?

But why do we swear?

Professor Timothy Jay from Massachusetts College claims that children learn swear words at a very early age; as soon as they learn to speak they start to swear, repeating words they hear.

My son loves to say ‘bum’ and ‘poo’ (the worst words he knows), especially when angry, or taboo ‘toilet words’, as he describes them in a whisper!

Kids learn that these words are powerful.

Swear words are used by adults when they’re emotional or angry. Kids also quickly realise that, when they use them, they get an emotional response and some attention. A forbidden word can be a powerful tool for a relatively powerless child.

For adults, swearing is a way of expressing our primitive anger; instead of hitting or biting someone, we can swear at them. It gives us a release without the need for the physical. Would you rather someone swear at you or hit you?

On a positive note, a study from Keele University in the UK actually found that swearing relieves pain.

“Repeating a swear word, compared with repeating a neutral word, allowed participants to hold their hands in ice cold water for 40 seconds longer (on average).”

Other studies have shown that people swear consistently throughout their lifetime. According to Dr. Jay, we swear on average 0.3% – 0.7% of the time, and that swearing is not just for the undereducated or the those in a lower socio-economic class. The truth is: swear words have no boundaries.

So, do you agree with Oscar Wilde’s argument that swearing is the “refuge of the semi literate”, or was Shakespeare right when he said “But words are words, I never did hear, that the bruised heart was pierced through the ear.”

Because I don’t have a f**kin clue!

Is swearing good for you? was last modified: October 13th, 2015 by katetoon