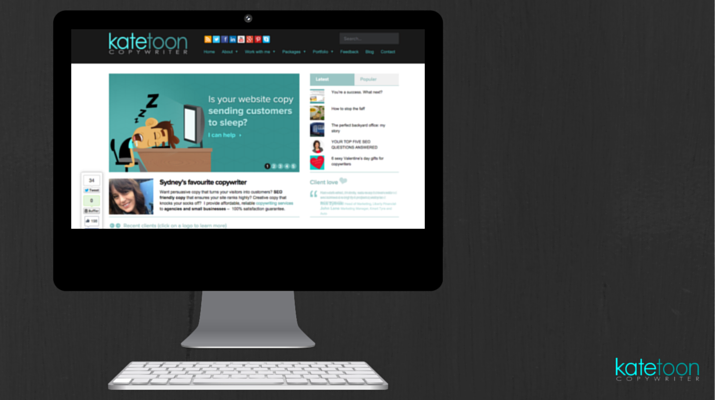 and one really bad one

I’ll admit I’ve been putting off updating my website for a loooong time. It was a niggle at the back of my mind; I knew it needed doing but, to be honest, I just couldn’t be arsed.

I had more work than I could handle. I had too much on my plate. So where was the need?

It wasn’t until Google announced recently that mobile friendliness was a ranking signal that I finally decided to bite the bullet.*

*The truth is it has been an important factor since well before the announcement, but there’s something about Google making it official that made me take action.

But there were a few other reasons I updated my site, and I think they’re strong enough reasons for anyone to considered when planning a website upgrade

So here are my five top reasons for to update your site (oh and one not so good one at the end).

5 good reasons to update your website (and one bad one) #responsive #websites.

Reason 1: To make your site responsive

When I first built my website back in 2009, smart phones weren’t really a thing – well not for your average person. Since then, the growth in device usage has exploded.

These days, if you don’t have a responsive or mobile-friendly website you’re missing valuable traffic. My site averages about 40% of its traffic from mobile and tablet devices, and since my site looked crap on them, the bounce rate was sky high.

I’d previously tried to fiddle with my site to make it responsive, but it was a half arsed job and ended up costing me a lot of money for fairly poor results. You can read about that debacle here.

So this time, I chose a responsive theme from the get go. The site you’re looking at now is built using Divi from Elegant themes.

While it took a lot of work to format my content in the theme, I love the ease of use it offers. It’s the second site I’ve built with Divi. (The Recipe for SEO Success is also a Divi site) and I’ll be writing a whole new blog about that soon.

With the move to ‘responsive’, unfortunately it’s not a case of if; it’s a case of when.

TOON TIP: You can test your site’s responsiveness using this tool.

Reason 2: To speed up your site

My old site had an embarrassing load time of 6-7 seconds, which in internet terms is just woeful.

In my new site I’ve:

It’s still not the fastest site in the world, I’ll be honest. (I’m working on it).
But I’m willing to sacrifice a little time in exchange for some sexy widgets and nice graphics.

This graphic shows my site speed according to the Google site speed tool,

Reason 3: To make your site secure

If you check out the URL above, you’ll see it now includes a little ‘S’.
I’ve moved from HTTP to HTTPS, which means my site is now secure and protected by SSL.

Normal website traffic (HTTP) is unencrypted, which means that every server that your traffic flows through on the way to the website’s server can read that data. If a website uses HTTPS, the data is encrypted, so, in theory, only you and the website can see what you’re doing on that website.

SSL stands for Secure Sockets Layer. It provides a secure connection between internet browsers and websites, allowing you to transmit private data online. Sites secured with SSL display a padlock in the browsers URL and possibly a green address bar if secured by an EV Certificate.

Why did I move to HTTPS?

In August last year Google announced , that HTTPS was a ranking signal.

“For now it’s only a very lightweight signal – affecting fewer than 1% of global queries, and carrying less weight than other signals such as high-quality content – while we give webmasters time to switch to HTTPS. But over time, we may decide to strengthen it, because we’d like to encourage all website owners to switch from HTTP to HTTPS to keep everyone safe on the web.”

Many warned me against moving to HTTPS, saying that they’d seen sites negatively affected by the move. My site isn’t ecommerce (I only have a simple contact form that collects fairly standard user data), so for me security isn’t a huge factor for me to consider.

The negatives of the move were:

But Cyrus Shepard from Moz told me.

“Facebook and Google will migrate in their own time (Twitter not so). When we migrated Moz, we did actually migrate social shares on older content that was unlikely to get many new shares. But for more recent content we just left everything alone and allowed share counts to migrate and accumulate naturally).”

I’ve decided just to leave mine too, but the loss of shares has given me a kick up the bum to try hard to share my older, still awesome, posts.

So far, I haven’t noticed any negative impact in terms of traffic or rankings from moving to HTTPS. 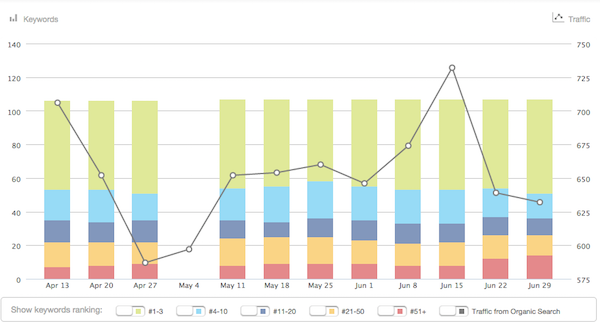 This chart shows the rankings for the 100 or so keywords I track with Moz.

If you want to learn more about moving to HTTPS – check out this great blog on the Yoast site: Should we move to an all HTTPS web?

One of the big reasons I wanted to update my site was that it needed a good spring clean.

My site was full of:

I used my new site launch as an opportunity to:

It’s super satisfying to have my crawl issues reduced from around 300 or so to 19. 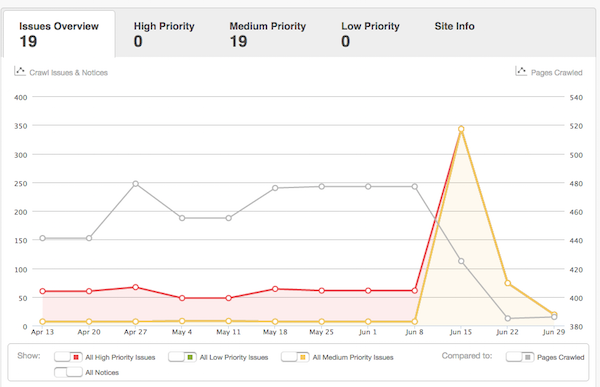 This chart is from Moz and shows my current crawl issues

Although it may seem strange, I didn’t update much of my content – probably only 2-5%.

Why? Well, because the content is working already, and I was reluctant to change too much in one go – because if anything had gone wrong I wouldn’t have known the cause. I wanted to narrow down the changes, so I’d know if the issue was the new theme, the httpsness, or the sitemap changes.

So, I’ll be working through the site pages over the coming months to make them snappier and more SEO friendly.

TOON TIP: Giving your site a spring clean is a great way to boost your SEO too.

Reason 5: To rebrand and reposition 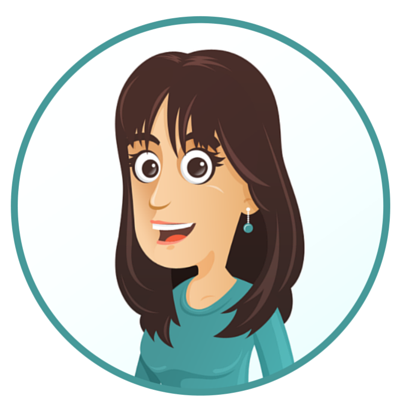 My business has changed a lot over the years, but my site hasn’t always kept up with me.

I wanted to do a minor facelift, which involved:

I also wanted to be more consistent with my colours and design, and actually used my designer Kate from One and One Creative to spruce up a lot of my DIY design work.

And now, the bad reason

The other reason I updated my site was that I was just plain sick of the design of my old site.

I watched as my competitors released slicker, sexier sites and was feeling left behind. I was jealous and I’d got to the point where I didn’t like looking at my site. It was embarrassing. I wanted to keep up with the Jones.

Yes, this revamp is my 5th site update in 6 years (You can read about my previous website makeovers here).

It’s easy to become addicted to site updating and spend so much time on it that you neglect real work. While there’s still a lot on my site that needs fixing, I need to learn to let go and allow it to do its own thing.

So be careful that you’re not just updating your site for the heck of it.

The truth is that a website isn’t just for Christmas, it’s for life. Sites constantly need to evolve to keep up with technology trends, and your business growth.

Of course, now I’ve rebuilt this site, my other older sites, like this one are looking a bit shabby, so they’re now on the ‘to do’ list.

Since moving to the new site, I’ve almost tripled my enquiry rate.

Psst: This isn’t something I really measure, but I know this because I stupidly broke my Contact form and it wasn’t sending me emails, so I went into the back end to see what was happening – and saw the count.

I’m happy with my new look, leaner, faster, cooler website. What do you think of it?

Have you recently updated your website? What were your reasons? And what challenges did you face? Please comment below: