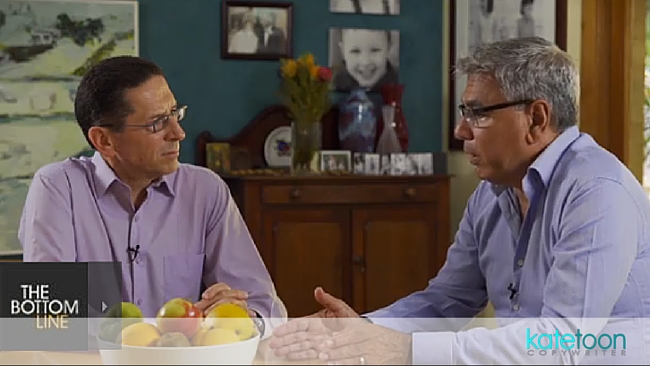 Although obviously I love all forms of copywriting it has to be said – there’s something rather thrilling about writing a TV or video script. Maybe it’s the immediacy of the visuals or the impact of hearing your words come to life. I don’t know. I just love ’em!

So I was chuffed to be invited to work on a TVC (Television Commercial) for the new series of The Bottom Line which aired on Channel 9am at 4pm on Saturdays (from the 15th February 2014).

The client asked for concepts for a 30-second television advert using clips from the footage already filmed.

There’s not a huge amount you can say in just 30 seconds! And with so many great guests on the show it was difficult to choose who to feature. I had to watch a LOT of footage to find the best possible quotes.

I watched all the footage and collected snippets of dialogue from each speaker, I then added in suggested lines for the presenter (Alex Malley – Chief Executive CPA Australia) and tied it all together with a narrator dialogue.

I initially presented three concepts around themes of ‘Real’, ‘Inspiration’ and ‘Imagine’. After client feedback, I developed the ‘Real’ script in two directions, one featuring snippets from celebrities and another featuring only Alex.

Working with Evolution, we decided on the best lines and the editing team did a great job of squeezing the maximum impact out of the 30-second time frame. We also created a longer version at 90 seconds which you can view here.

What do you think? Post in the comments below.

This was a great project and it was fun to work with the lovely team at Evolution, especially Chris Seeto, my main point of contact. Here’s what he said about the work: