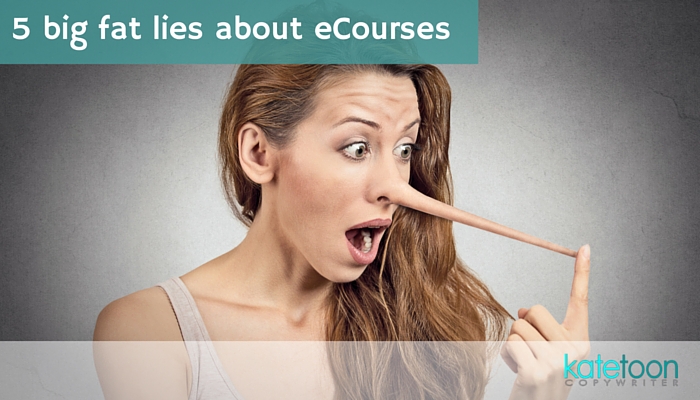 What the ‘passive income’ pushers don’t want you to know

If you hadn’t guessed already, eCourses are kind of the thing right now.

A quick scroll through your Facebook timeline will reveal that every Tom, Dick and Barry is running an eCourse on everything from ‘coaching’ to ‘couch surfing’ and ‘mindset’ to ‘macaroon making’.

And then there are the eCourses that tell you how to create an eCourse. They often make BIG PROMISES about passive income, and boast that “You too can make a six-figure income”.

But I’m here to give a big hard slap in the face with the wet fish of TRUTH.

I’m afraid eCourses aren’t all they’re cracked up to be.

They’re not a pot of gold at the end of your business rainbow.

And they won’t allow you to operate your business from a hammock in Fiji.

In fact, they can be a huge drain on your time, emotions and finances.

So, in this post I’m going to break down the big fat lies about eCourses one by one.

Many people selling their eCourse on eCourses back up their knowhow with tales of six-figure incomes. Because obviously the more they’ve earned the more qualified they are to instruct you, right?

But let’s be honest: Unless you can see their bank balance you have no way of knowing their claims are true.*

And I’m guessing there might be a little creative exaggeration going on.

And here’s a screengrab from Xero to prove it.

I’ve also earned a couple of grand from my SEO book.

Now I’ll admit it’s a tidy sum. But I’ve earned every penny of it through blood, sweat and beers.

I’ve lost count of the number of hours I’ve devoted to my eCourse. By which I mean I deliberately stopped counting

as it was too depressing.

Also let’s not forget what I’ve had to spend to earn that money.

And then there’s the tax to consider.

Don’t get me wrong: it’s a good amount. But given the amount of time I’ve spent on it it’s by far the least profitable part of my business.

Well, so far at least. Who knows what the future will bring? (Hopefully millions.)

*I know of some people who’ve literally made millions from their eCourses, such as Denise Duffield-Thomas of Lucky Bitch fame.

But I also know many others who work on their eCourse for months and end up selling only two or three tickets.

Not everybody can be a success story.

Unless the course is absolute rubbish, I doubt there was anything passive about it. A good eCourse can take weeks, even months, to produce. It’s certainly not something you can knock over on a weekend.

As I mentioned earlier, I lost count of how many hours I devoted to my eCourse. But I’d say it took around 100 hours to create, along with many hours of design, code, VA, editing and proofing time.

And don’t get my started on the hours I spent trying to upload videos on my crappy ADSL Internet connection.

Even when I finished the eCourse and launched it, I still needed to spend countless hours:

And because my eCourse is all about SEO, I have to update it all once a year. (Thanks for nothing, Google.)

You soon realise that while it’s an income, there’s nothing passive about it.

“Passive income isn’t passive at all.
There’s a whole heap of hard work that goes into a course. And I’m not just talking about writing that course. Students need support!
You’ll have questions to answer about enrolment, price queries, questions about content, and much more. You have to love what you do, and want to be there for your students.”

“I have tried to create the most supported online copywriting course around, which means I review all the students’ course work and provide detailed feedback. I also answer their questions, and host regular coaching calls. My students’ copywriting improves a lot faster with that support, but I hadn’t really considered how much time it would take. It’s rewarding, but certainly not a passive income!”

Big fat lie #3: If you build it, they will come

After putting all that hard yakka into your eCourse you may start believing your own hype.

“This eCourse is awesome. People are going to love it. There’s a huge gap in the market, and my eCourse will fill it as snugly as a kitten shoved into a pint glass.”

Yes, your eCourse may well be the most awesomest eCourse ever created. But if people don’t know about it… well, they can’t buy it.

You need to promote an eCourse a lot more than you do a service such as copywriting. Because you often need to convince people not just that they need your course, but that they need a course at all.

For The Recipe for SEO Success eCourse I’ve spent a fair few dollars on:

I’ve also spent many a late hour spruiking my course in online communities, and invested in a few pointless sponsorships and ad placements on blogger sites.

“There are countless hours of promotion pre- and post-course that must be put in on social media, interviews, press releases and mainstream marketing. And this is most probably the biggest area of ‘I didn’t know how much time it would take’ we hear. Promotion makes or breaks a course, so make sure you have the time and funds to give your course the promotion it needs.”

As well as the standard advertising route I’m also trying to build brand awareness through:

But while these are free, they still eat into my time.

“One thing we wish we’d known beforehand is that you need to invest a lot of time and energy to plan your pre-launch promotions to ensure the launch is successful. Anyone who thinks they’ll have a five- or six-figure launch after running just one webinar has another thing coming.

Most people won’t buy a course from someone they don’t know, so you need to start building a relationship with people at least three months out from selling your course.”

After five years of fairly lethargic email collection on my various sites I had a fairly hefty email list by the time I started. But even so only a tiny percentage of those converted.

The average conversion rate from my general Kate Toon list has been around 1-2%. And from my 10-Day SEO Challenge list it’s been around 3-5%, although I’m sure some people will sign up later this year.

As you can see, those aren’t big percentages.

And all that endless salesness in your email? That can quickly lead to burnout or even worse—unsubscribes. Your loyal fans just might not fancy your eCourse, and if you send them 17 reminder emails they’re likely to get a tad pissed off.

“After I successfully launched my online group coaching program, Hustle & Heart, I didn’t take into account how quickly I’d tap out my own email list.

Regardless of how long you’ve been emailing, you need to take list building seriously so people are involved in your content, getting to know you and understanding your particular approach and style— in numbers, and on a regular basis.”
Brook McCarthy | Hustle and Heart

Okay I’m going to say it. Some days I hate my eCourse.

There are days when I don’t just feel like chucking in the towel. I feel like ripping it to shreds and running naked around the garden, shrieking.

And there are days when I love it more than I can say. I’ve made some lifelong buddies amongst my students, and I’ve learned as much from them as they have from me. (Well, almost.)

The problem is, I didn’t really think it all through. I didn’t think what I’d get out of the whole experience. I just focused on creating great content and fixing bugs in my platform.

“I wish I’d thought more about what I actually wanted to deliver—not in terms of content, but in terms of the additional services that form part of the course. We focus so much on what our market wants or needs in terms of resources or content, but I don’t think we put enough emphasis on what we, as the deliverers of that content, want to get out of the experience, or the services that actually bring us joy.
There’s really no point creating something that you will end up resenting the delivery of.”

So, would I do it all again?

Despite falling for the hype, I must admit I’m hugely fond of my eCourse. It’s transformed my business, and added a whole new dimension to my life.

It’s also opened up lots of other opportunities, such as public speaking at events.

As I said earler, I’ve met some amazing people. More importantly, the course has had a genuine, positive impact on their business. Which gives me a warm, squidgy feeling in my belly.

So I’m not telling you NOT to run an eCourse. But if you’re planning one, please consider all the angles before you get stuck in.

Do you run an eCourse? What big fat lies have you discovered?

#eCourses: What the ‘passive income’ pushers don’t want you to know