6 shitty jobs and the lessons I learned 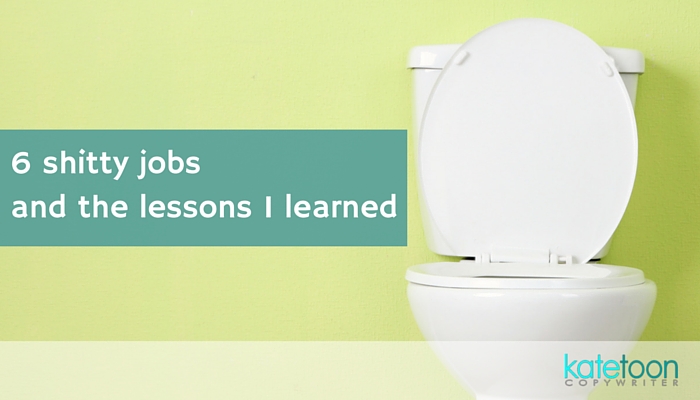 These days I talk to a lot of copywriters who’ve always been copywriters.

I have pairs of socks older than some who are now running highly successful copywriting businesses.

But while I admire their chutzpah and envy their entrepreneurial sprit, I also wonder whether going straight into your dream career is actually good for you.

Don’t we need a little work experience before we start our own thing?

Admittedly my clamber up the career mountain has been rocky. I’ve had some truly terrible jobs, and wandered through the vocation wilderness for months at time.

But each job was illuminating, and I don’t think I’d be the business woman I am today without these often hideous experiences.

So I wanted to share a snapshot of my worst jobs, and how the lessons I learned helped me build my business.

6 shitty jobs and the lessons I learned #business #copywriter 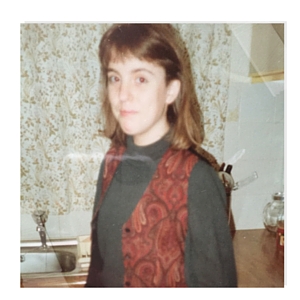 My first job was subcontracting for my brother. While he sat at home watching TV I trudged around our housing estate posting the free paper in people’s letterboxes.

(And yes, I put it in their letterbox rather than throw it on their lawn. I was a professional even then.)

These days a kid with a job like this would probably have their mum following in the family SUV to make sure they were safe.

But back then Mum was happy for me to wander the streets in the gloom of dusk while she cooked dinner and listened to Barry Manilow.

This was pre-iPod (or even Walkman), so it was just me and the pavement. The bag weighed as much as a small toddler, and I came home filthy from the news print.

But oh, how I loved that job.

My brother got paid two pounds a week—a princely sum at the time—of which he gave me 40p. Looking back it was a terrible deal, but I was just delighted to be earning extra money. That 40p could buy two creme eggs and a Jackie magazine, which was all I wanted out of life.

Subcontracting is the way go to. My brother was living the passive income dream back in 1985. 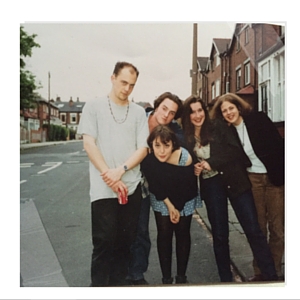 Oh to be a student again.

As a student, money was tight.

I remember taking my 11 pence (around 20 cents) to the corner shop and begging for a single egg and half an onion to make ‘omelette à la Toon’ (still a personal favourite).

So when the chance to earn a commission selling aerial photographs came up, I jumped at the chance. Or rather I grunted “Okay” while levering myself from the throw-covered saggy sofa in our tatty student flat.

A group of us were driven in a minibus to an anonymous estate on the outskirts of Liverpool, given an aerial photograph of our appointed cul-de-sac, and told to go forth and sell.
(By this point all the nice housing estates had been worked out.)

I remember identifying one person’s house by pointing out the tiny burning sofa in the street and cross-referencing it with the burnt-out shell their eight children were now bouncing on.

It was tough work. Most people immediately slammed the door in my face. Others talked to me for hours but clearly had no intention of buying. They were just lonely.

In two weeks I sold just one photo to an old couple. But the brief moment of elation (I’d finally earned a 20-pound commission) was quickly squashed by a feeling of disgust that they clearly couldn’t afford it.

I chucked it in the next day.

It’s really hard to sell a crap product you don’t believe in. 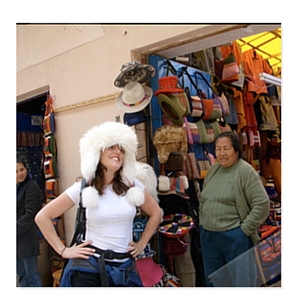 This hat was so aawesome.

After university I wanted to study journalism, but my morbid fear of debt meant I didn’t dare take out a loan for the fees. So instead I drifted from office job to bar job to shop job.

I finally scored a semi-well-paying gig as a cloakroom girl where I could scam free drinks, read my book and be rude to customers because the club was cool and they were not.

But I still needed extra cash, because back then 21-year-old me and Topshop was a dangerous combination.

My actress friend was working for a chat line, and said it was a great opportunity for her to practice role play. But for me, not so much.

We were paid according to how long we could keep the punters talking, with bonuses if we made the magic hour-long mark.

While the bored middle-aged housewives around me purred sweet, filthy nothings into the moist, eager earholes of our customers, I awkwardly asked them about their holidays, whether they had brothers and sisters, and what was their favourite flavour of jam.

I couldn’t connect with my audience, and simply didn’t know how to talk dirty.
I was let go after my first shift.

It’s vital to understand your audience, and be able to speak their language.

I was 22 when I got my first job in ‘advertising’, working at the prestigious Saatchi and Saatchi in Soho’s Golden

Square. The office was fabulously schmick, and famous for its glass staircase where the ad execs would gather to look up the skirts of the female staff.

I was a P.A. to one of the Account Directors. His main account was promoting the Conservative party, and he was a cross between Boris Johnson and Don Draper.

In short, he was a twat.

He took huge delight in pointing out my every mistake, and called me his ‘silly little girl’. I regularly fantasised about pushing him down those glass stairs.

I escaped after three months into a publishing role and promised never to work in advertising again. 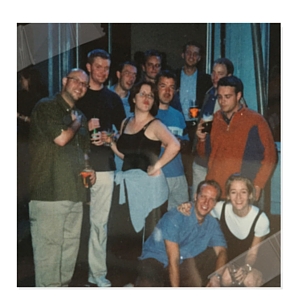 Yep that’s me in the middle. The shame.

After a year or so in publishing, the internet was invented*. And I decided I wanted a piece of the digital action.
I applied for a producer job at a super-trendy, up-and-coming internet agency, even though I had no clue what I was doing. And by some crazy chance I got the role.

My main project was to manage the Marks and Spencer website. I was immediately thrust into rooms of insanely clever designers, copywriters and programmers, where I was supposed to tell them all what to do.

In one of these early meetings I classically asked “What’s a browser?” The hushed silence that followed still haunts me to this day.

But my boss was awesome (“Hey, Terry”), and saw potential in me.

He offered me a promotion after a few months, but I turned it down.

I’d blagged my way into the job, but the stress of those early months was horrendous.

Trying to pretend to be something you’re not isn’t fun. And trying to talk about something intelligently when you don’t understand it yourself is hideous.

I really wanted to know what I was doing before I took the next step. So I waited, and several months later got the promotion that started my digital career.

While it’s occasionally good to talk the talk before you can walk the walk, it’s also good to know your limits.

After about 15 years working in agencies I was at the end of my tether. I was now running a digital department for a well-known agency, and battling with old-school creative directors who wanted to build websites in InDesign.

I needed a break.

I’ve written at length about my job working at a well-known florist during the Valentine’s Day rush. You can head here to read all about it.

Suffice to say they treated their staff like slaves, and I worked harder in those two days than I have in all my years since.

But the hard-working women who were earning a pittance for their families were amazing. Most were immigrants, with only a few years in Australia under their belt.

They were grateful to be in the country, and just as grateful for the work, their lives, their families and the opportunity.

Their immense and humble gratitude made me realise what an ungrateful moo I’d been. And that I was lucky to have such a cushy life.

How lucky I am to be living in a free country where women’s rights are largely respected.

Of course I could regale you with more job tales—my time as a gibbon keeper, school cleaner, underpants folder in a large retail store—but I think you get the idea.

All of these experiences taught me a lot about people, about business, and about customers.

But more importantly they taught me a lot about me.

It’s been a long journey to find my true vocation. Even now I’m buffing the edges of my ideal role. But I don’t regret any of the career decisions I’ve made.

Have you had any hideous jobs? What did they teach you, and how have you used those lessons in your working life?

* It was actually invented several years earlier, but in about 1996 it became a thing.

What’s the worst job you’ve ever had? #business #crapjobs

6 shitty jobs and the lessons I learned was last modified: August 15th, 2019 by katetoon